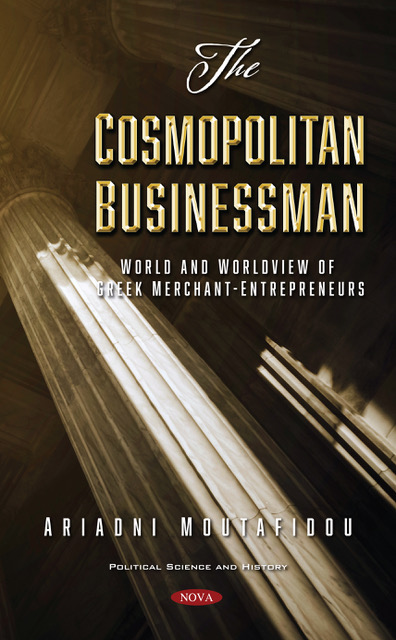 Ariadni Moutafidou, a well-known historian who wrote extensively about the history of Greece in modern times, focuses in her newest book, The Cosmopolitan Businessman, on the nineteenth century history of the Greek mercantile diaspora in its time of prominence. Drawing on a wide range and variety of research Moutafidou examines entrepreneurial networks formed across geographic boundaries in land and sea relating cultures, ideology and mentalities with economic practice and business performance.

The author investigates cases of distinguished personalities and prominent Greek merchant-entrepreneurs and shipowners shedding light on their activities and ideas, and on how they appraised their business and their competitors. Vikelas, the first President of the International Olympic Committee, along with the Melas, Mavros and Basileiou families, Malta-based broker Pappaffy, an influential businessman of the British and Mediterranean economic world and a celebrated philanthropist, the Rallis, Petrocochinos and Salvagos, Syngros and the Zarifis, are only few of the many captivating figures appearing in the book.

Moutafidou thoroughly looks into sources such as memoirs, literature, archives, commercial trade books, the press as well as family records and references made by rival businessmen. She compares various historical times, regions and ethnic groups, and draws useful parallels and/or differences with the Greek case. In the process, she investigates the relations between distinct, ethnic mercantile communities, using the Greek case in particular and the paradigm of leading Jewish merchant–bankers West and East, such as the Bischoffsheims, Oppenheims, or Camondos, and exploring the themes of internationalization, competition and cooperation, risk and innovation. Her method allows her to enrich our knowledge about early globalization, about the importance of liberalism, and the operation of capitalist activity.

An original book, unique in its field. Historians, their students, and an interested public as well, will greatly appreciate this significant contribution to the study of economic, social and cultural history of the Greek mercantile diaspora, Europe and the Mediterranean world.

Her main fields of interest include Greece, the Ottoman Empire, Europe and the Mediterranean in modern times. She specialized in international relations in crises situations, new and peripheral imperialism, and interethnic voluntarism. Her latest research and publications are focusing on the history of ideas, Greek merchant families East and West, and the global domination of modernity in Europe, the Americas and the Near East.