Richard Clogg: Greek to Me. A Memoir of Academic Life 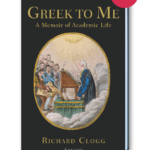 The 1960s was a tumultuous period in the history of Greece, as its democracy fell under the forced establishment of a military dictatorship.The regime of the Colonels was the culmination of national division and hostility between communist forces and right wing militants. It was in these extraordinary times that British historian Richard Clogg witnessed the 1967 coup, while living in Athens and researching modem Greek history.

Following his abrupt immersion in Greek politics and political activism, Clogg went on to a joint appointment at the School of Slavonic and East European Studies (SSEES) and King’s College, London. At King’s College, he uncovered the contested history of nationalist funding in academia After publishing his controversial book Politics and the Academy: Arnold Toynbee and the Koroes Chair, Clogg moved to St Antony’s College, Oxford.

Greek to Me: A Memoir of Academic Life is an engrossing tale of academic and political intrigue, spanning Clogg’s time in Greece and in the Department of Byzantine and Modem Greek Studies at King’s College London. Through extensive personal archives of his fascinating adventures, Clogg exposes the secretive fields of
academia and university politics as well as providing unique eyewitness accounts of modem Greek history.

RICHARD CLOGG was Professor of Modem Balkan History at King’s College London between 1988 and 1995. He then became a Senior Research Fellow at St Antony’s College, Oxford and in 2005 was elected to an Emeritus
Fellowship of the College. His publications include A Concise History of Greece; A Short History of Modem Greece; Parties and Elections in Greece; and Greece 1940-1949: Occupation, Resistance, Civil War: A Documentary History. 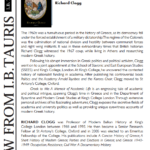